Peter Scherrer, who was born in Linz in 1958, has been Professor of classical and provincial Roman Archaeology at the University of Graz since 2008. Before that, he worked at the Austrian Archaeological Institute in Vienna.

Besides working as a university lecturer in Vienna and Salzburg and as President of the Austrian Archaeological Society, Dr. Scherrer was also a member of the executive team for archaeology in Ephesos (Turkey). At University of Graz, he is Head of the Institute of Archaeology, the interdisciplinary Antiquity Centre, and is also responsible for the refurbished university museums. From 2011 to 2019 he was Vice Rector for Research and junior researchers´ promotion at the University of Graz.

Peter Scherrer’s activities as a scientific consultant for the Austrian, Serbian and Slovenian Ministries of Science, the universities of Innsbruck, Regensburg, Mainz, Stockholm, Trnava and Tours, as well as being an elected member of the Slovenian and German Archaelogical Institutes is eminent proof of his international Reputation. 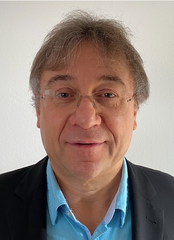 His special commitment for the training and education of PhD and master students has been acknowledged in 2012 by granting him the teaching award of the University of Graz for his achievements in research-oriented teaching.

In his research, documented in more than 200 and quite often well-cited publications, he is taking up contemporary problems in particle physics, gravitation and mathematical physics. Hereby, the members of his group are working in international collaborations. Quite often, graduate students took the respective opportunity of a long-term research visit which allowed them to work together with leading scientists in their research area at universities and labs, e.g., in the USA, Brazil, Spain, France or Germany.

Reinhard Alkofer served several times as director of the Schladming Winter School in Theoretical Physics which has been for many decades a renowned school for PhD students in elementary particle physics and related areas. He is member of the Theory Advisory Group of the PANDA experiment within the planned FAIR project in Darmstadt, Germany. Last but not least, he is member of the Editorial Board of the European Physical Journal.